Asilah, ofcourse! One of the cities in Morocco located in the Northern part known by its own culture, art and history. Definitely worth a visit if you are traveling trough Morocco.

Every summer there is a cultural festival. This attracts loads of tourists. During the festival artists arrive to change these wallpaintings for new ones which will last on that wall for a year until the next festival.

This was a little about art. Let’s talk about the beach! Asilah counts over 12 different types of beaches nearby and the closest ones are reached in minutes by feet. The most famous one is the one you can only reach by car or on a horse. Or if you like walking, it will cost you a walk of a hour. This beach is called “Rmilat” (also known as “Paradise Beach”). The road is bad and has enormous gaps in the road. I would recommend a taxi. If you arrived on top of the hill you will have an amazing view over the Atlantic ocean and the beach lying in between two giant hills. 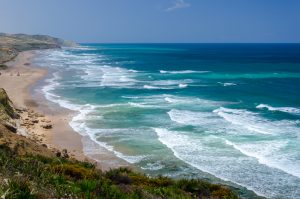 On this beach there are enough places where you can have a soda or sandwich, or even dinner! The last one is really recommended. I always order a Fish “tagine” (traditional Moroccan dish) upon arrival. You can dive, sun, swim or play soccer on the beach. When it reaches 17:00 you will be called by the restaurant where you ordered the Tagine. You can enjoy a wonderful tagine while the sky gets orange and the sun goes slowly down. A feeling you really have to experience. 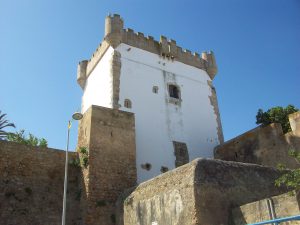 The town’s history dates back to 1500 B.C., when Phoenicians occupied a site called Silis or Zilis, Zilil which is being excavated at Dchar Jdid, some 12 km NE of present Asilah; that place was once considered to be the Roman stronghold Ad Mercuri, but is now accepted to be Zilil. The town of Asilah itself was partly constructed by the Idrissi dynasty and Cordoban caliph Al Hakam II rebuilt the town in 966. The Portuguese conquered the city in 1471 and built its fortifications, but it was abandoned it because of an economic debt crisis in 1549. In 1578, Sebastian of Portugal used Asilah as a base for his troops during a planned crusade that resulted in Sebastian’s death, which in turn caused the Portuguese succession crisis of 1580. In 1589 the Moroccans briefly regained control of Asilah, but then lost it to the Spanish.

In 1692, the town was again taken by the Moroccans under the leadership of Moulay Ismail. Asilah served then as a base for pirates in the 19th

and 20th centuries, and in 1829, the Austrians punitively bombarded the city due to Moroccan piracy.

From 1912 to 1956, it was part of Spanish Morocco. A major plan to restore the town was undertaken in 1978 by its mayor, Mohamed Benaissa. Benaissa and painter Mohamed Melehi were instrumental in organizing an art festival, the International Cultural Moussem of Asilah, that starting in 1978 began

generating tourism income. It is credited with having promoted urban renewal in Asilah, and is one of

the most important art festivals in the country. It played a role in raising the average monthly income from $50 in 1978 to $140 in 2014. The festival features local artwork and music and continues to attract large numbers of tourists.

Asilah is now a popular seaside resort, with modern holiday apartment complexes on the coast road leading to the town from Tangier. The old neighbor

hoods are restored and painted white, and the wealthy from Casablanca have their weekend getaways here.